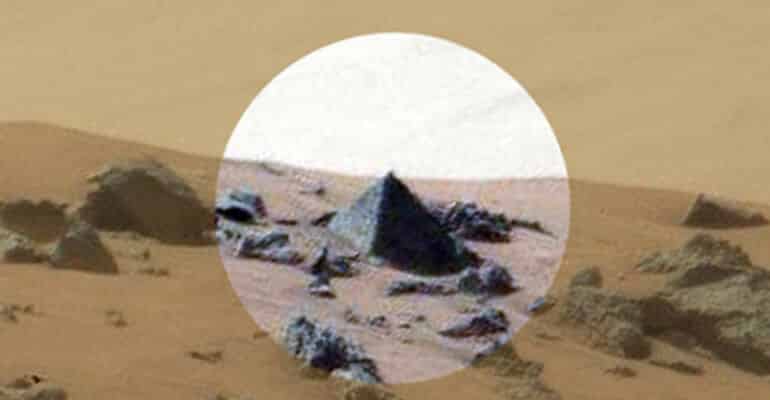 Scientists and Ufologists have already begun to hypothesize what this monument is. According to some NASA specialists, the pyramid seen in the picture might be only a small part of it – the head, with the rest of the body buried under the Martian terrain.

While skeptics say this is just another small rock that was given too much attention, others believe the perfectly shaped body of the structure indicates that it was artificially fabricated by an advanced alien civilization that has abandoned Mars a long time ago.

Could this actually prove that Mars supported life at some point? The surface of Mars is a desolate waste, but according to the pictures sent by Curiosity rover, it is plausible now more than ever that planet Mars was inhabited and fully supported life, and who knows? Maybe it still does.

Regardless of this discovery, which could put humanity in a totally different perspective over time, space and forms of life in the universe, the team responsible with Curiosity only chose to take a few pictures of it, from a very few angles. It is also interesting how they purposely chose not to zoom into the strange structure for further evidence. Such a discovery, if it were legitimate, would mean the beginning of a new scientific era. I believe that this much is true, and that NASA took countless pictures of the object but they were not released to the general public for obvious reasons. Former NASA employees have stated that the agency works under a curtain of secrecy and a considerable part of the evidence that has been gathered is highly classified.

It is a rock,” NASA principal investigator Dr. Jim Bell told press. “It is probably a volcanic rock (like most rocks that we’ve seen with rovers on Mars), and just like many volcanic rocks on Earth, the volcanic rocks on Mars break and cleave in very sharp, angular ways. This one happens to have cleaved into a pyramidal shape, which is actually not too uncommon among hard, dense volcanic rocks on Earth either.”

Some people believe the information gathered on Mars is being processed first and afterwards released to the public under a different shape. Much alike the “nation’s attic”, NASA might be covering the real information about alien life because otherwise, history as we know it would change drastically and the current world order would lose credibility and eventually go down the drain.