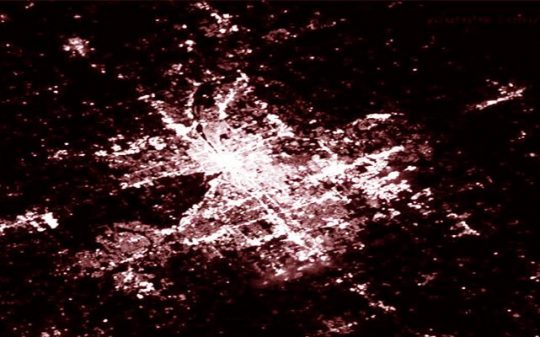 New images sent back from dwarf planet Ceres reveal a detailed perspective of the bright white spots considered by many to be an extraterrestrial city.

To recap on this topic, Ceres is a dwarf planet located between Mars and Jupiter that was subject to heated debate last year, when scientists around the world tried to determine what formed the mysterious white dots seen on the planetary surface. With the recent photos beamed back by NASA’s Dawn spacecraft, researchers are closer than ever to solving this puzzle.

The pictures revealed only recently at the 47th annual Lunar Planetary Science Conference in Texas, were captured from a distance of 385 kilometers (240 miles) above the Occator Crater, a 4 kilometers-deep hole on the planet’s surface stretching across 92 kilometers of rocky terrain.

The novelty of those pictures is given by the relatively low altitude from where the probe is hovering above the dwarf planet. Planetary scientist Ralf Jaumann explained the following:

“Before Dawn began its intensive observations of Ceres last year, Occator Crater looked to be one large bright spot. Now, with the latest close views, we can see complex features that provide new mysteries to investigate. The intricate geometry of the crater interior suggests geologic activity in the recent past, but we will need to complete detailed geologic mapping of the crater in order to test hypotheses for its formation.” The team of researchers has also made public a colour map of Ceres’ surface which contains the various materials from which the dwarf planet is made of and a close analysis of craters around it. This data is vital for determining what lies below the Ceres’ crust.

Another surprise from Ceres comes from the Oxo Crater where traces of water were spotted through the infrared mapping spectrometer (VIR). It appears that the bright spots are not the only controversial subject, as numerous mysteries are still being found by the orbiting probe.

A new research paper will soon be released with some of the mysterious discoveries on the dwarf planet. The new data will encompass further details into the mystery regions of the planet such as the Occator Crater, but will also focus on new discoveries such as the liquid water recently observed.

Although astronomers debunked the white bright dots as being salt deposits, it has been highlighted that they constantly change in shape and size, and no one seems to know the reason for the moment.

The latest high-resolution map of Occator Crater clearly indicates there’s no alien city found on the surface of the planet, but since there’s a clear indicator of geologic activity underneath the dwarf planet, along with liquid water and other anomalies, the possibility of an underground ecosystem arises.

Furthermore, there are some sky watchers and UFO analysts who firmly believe there are signs of intelligent life on Ceres. Although NASA has unveiled a close-up of the bright spots from Occator Crater, the bizarre mountain “Ahuna Mons” hasn’t been brought into discussion yet. Could this prove that the renowned space agency has found something suspicious there and refuses to reveal it to the public until a proper investigation (or alteration) has been done?

Whatever the case, dwarf planet Ceres will remain as enigmatic as last year and will provide debatable content for both the scientific community and UFO enthusiasts. Until NASA reveals more pictures, we can only speculate on what could reside underneath Ceres’ crust, but I have a feeling that we’re not being told everything.