Are UFOs attracted to nuclear explosions? According to a 1957 Army report, they are.

Nuclear detonations release tremendous amounts of energy. They also set loose a shower of gamma rays, making them very hard to go unnoticed. Astronomers already have the technology to detect distant nuclear bursts in our galaxy. It goes without saying that a civilization advanced enough to master interstellar travel could easily notice if we blew up one of these weapons of mass destruction.

Ufologists often compare detonating nuclear weapons to putting up a sign that certifies we now have the ability to destroy ourselves. If there are peacekeeping aliens out there, they would certainly be keen to investigate the matter.

On July 16, 1945, mankind set off its first nuclear device. Bearing the code-name Trinity, the affair was carried out at the White Sands Proving Ground in New Mexico. The operation was considered a success and the knowledge gained would be used to level down Hiroshima and Nagasaki. The death toll numbered in the hundreds of thousands. Twelve years later, the Chicago Tribune ran an article titled Object Hovers Near A-Bunkers, which describes a radiant “oval” being spotted near the bunkers used during the first nuclear explosion.

The sightings were made 17 hours apart by two different military police patrols on this southern New Mexico missile testing range.”

At approximately 0800 hours, a two-man patrol radioed their commanding officer to report a bright light hovering above one of the abandoned A-bomb bunkers. The bunkers contained no equipment or ammunition that could have attracted the attention of the luminous UFO.

In their written statements, specialists Forest R. Oakes and Charles A. Barlow said that “the large bright light took off at a 45-degree angle and went up into the sky and started blinking on and off.” Shortly after, it vanished.

The patrolmen described the unidentified object as a flattened oval measuring 200 to 300 feet in length and said it illuminated the entire area directly below it. Unfortunately, a camera wasn’t part of their standard equipment.

The nervousness of the commanding officers at White Sands must have reached a new level, as this was the second sighting in less than 24 hours.

The previous incident had occurred at 0300 hours but this time the detonation site had been visited by an egg-shaped UFO of approximately the same size and characteristics. It was witnessed by Corporal Glenn H. Toy and Private First Class Wilbanks.

[…]they noticed a very bright object high in the sky. The object descended until it was 50 yards above the A-bomb bunkers when it went out.

A few minutes later, Toy said, the object became real bright, like the sun, then fell in an angle to the ground and went out.”

According to the two observers, the UFO landed near the old bunkers about three miles from where the MP jeep was parked. By the time they reached the landing site, the object took off and disappeared into the night sky.

The following day, White Sands Proving Ground personnel scoured the area for physical evidence of the UFO visit but their efforts were fruitless. A subsequent investigation revealed that a similar object had been spotted and photographed near White Sands less than a month before.

And if you thought the area has lost its appeal to extraterrestrial visitors, take a look at this 1997 video showcasing what appears to be another object “nearly as bright as the sun” crashing somewhere in the deserts of New Mexico: 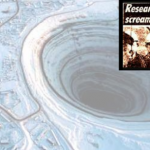