Two images from a recent UAP sighting posted to the MUFON network have managed to capture a strange presence in the night sky over the Greater Philadelphia area. One of them shows what appears to be a green orb UFO surrounded by a visible force field, while the other illustrates swooshing orbs and a cigar-shaped object.

The photos were taken by JD, a music producer and photographer living in Langhorne, Bucks County, PA. JD says he enjoys pointing his camera lens towards the cosmos and snapping slow exposures of the night time sky. That’s what he set out to do on the evening of July 15, unaware that he was about to capture a phenomenon that has been around for who knows how long and has seen a steady resurgence in the past few years.

“At approximately 9:15 p.m. I set my Nikon D90 on a tripod and pointed towards the SW sky. Set the camera for 30 second exposures while on the tripod for maximum light and clarity.”

After taking several shots in the front yard, JD set up his camera in the backyard, pointing towards the NE and snapped a few more photos. At the time he was taking the photos, JD saw no unusual activity happening above. But later that night, as he was examining the photos, the photographer was surprised to find intruders in two of his images. The first one, snapped in his front yard, shows the moon rising and the sky becoming dotted with stars. But the composition also includes an ethereal-looking greenish orb that doesn’t seem to have any solid structure to it. Its shape implies forward movement but no trail is left behind and it was completely silent, otherwise it would have caught JD’s attention. “When shooting the set of photos I had captured, nothing seemed different or weird,” he wrote in the report.

This strange entity doesn’t appear to be the same type of orb UFO routinely spotted throughout the world; those are usually spherical and much brighter. If anything, orb UFOs could be responsible for the anomalies in the second picture, but this green thing has to be something else. As it turns out, it might even be a living entity, as suggested by Dr. Franklin Ruehl, an American ufologist and cryptozoologist with a Ph. D. in theoretical nuclear physics from UCLA.

He believes incidents such as this one are caused by a type of para-biological entities he dubbed zeroids. The term zeroid is a reference to the low temperature and virtually-nonexistent pressure of deep space. According to Dr. Ruehl, zeroids could have evolved in the ’emptiness’ of outer space, presumably from organic matter. If this is the case, they wouldn’t have needed planets to subsist and develop and this means they could be one of, if not the first life form to appear in our universe. Unrestricted by planetary bounds and arriving early at the cosmic table, zeroids could have traversed vast distances and colonized entire galaxies. This image purportedly shows a zeroid.

“Considering that our island universe is approximately 13.7 billion years old, it is conceivable that zeroids represent the earliest forms in the cosmic backdrop, perhaps even existing for nearly that entire time,” Dr. Ruehl wrote. With such an elonged span of time at their disposal, zeroids could easily have trod many different evolutionary paths: They may range in dimensionality from the microscopic to the macroscopic.”

Having evolved physical forms to withstand the hardships of the cosmos, it is possible that zeroids might have a hard time surviving in Earth’s atmosphere. The temperature and pressure could be deadly for them, and that is why Ruehl  posits “some may have evolved a protective shield — either physical or electromagnetic in nature — that has enabled them to survive entry into our domain.” Take another look at the photo. Does it show anything like that?

If Ruehl’s assumptions hold water, we might have an explanation for the myriad of sightings that feature ethereal flying entities. Their behavior would undoubtedly be influenced by their intelligence and it stands to reason that they might attempt to communicate as well. Having studied us from above, they could know enough about human culture to open up some communication channels. The message looks pretty clear to us.

This brings to mind another recent sighting that we’ve covered in a previous article. A little over two months ago, a man from Olympia, WA (which is located 30 miles west of Mt. Rainier, the location for Kenneth Arnold’s historical UFO sighting) became witness to a strange incident involving a ring of fire in the sky and a shape-shifting entity that came through it.

The entity put on a dazzling display of form and imagery, ranging from abstract shapes to more concrete depictions, such as faces and human shapes:

“It was displaying so many images I knew while I was videoing it was special,” the witness told us. “It moved around but stayed in the area it started until it left.[…] I do feel like it was trying to show me or tell me something. The images I have range from alien faces to people hugging and holding children to men in space suits.” JD’s second photo, snapped in his backyard, shows several streaks of light, possibly caused by orb UFOs or even other zeroids, as well as a classic, cigar-shaped unidentified object. Just as impressive, but not as elegant as the vaporous, greenish entity, the objects in the second photograph add another layer to this case already brimming with mystery.

So who or what do you think were the culprits: unexplained earthly phenomena, extraterrestrial craft, alien bioforms or something mundane? 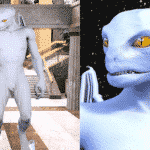 13 Dark Secrets The Vatican Doesn’t Want You To Know