The Story Of The Man The CIA Sent To Mars Back In 2017, the CIA declassified right around 12 million pages of records which later was coined the “Stargate Project” that revealed previously unknown details about the program.

An Army veteran by the name of Joseph McMoneagle stood out among all the psychics who worked with the government’s top-secret program, which was utilizing remote viewing, like from the film the men who stare at goats with George Clooney. Over a 6-year period, From 1978 to 1984, McMoneagle participated in approximately 450 missions. These missions ranged from but were not limited to supporting the army in finding hostages in Iran as well as helping CIA agents locate shortwave radio allegedly hidden inside of a calculator of a KGB agent who was at the time captured in South Africa.

When reports and details of these Governments experiments leaked and came to the surface throughout the 1980’s, the Pentagon still denied that it was spending money on any form of paranormal research, trying to keep things hush hush, and brush them under the rug. Thankfully, in 1995, the CIA did publish a report that was created by independent American research and publishing institutions that actually brought the work of the US government with psychics for military intelligence purposes to light.

In these released CIA documents, one experiment is described where the most famous medium of this project, Joseph McMoneagle, former military and CIA was then offered to take an astral journey to Mars approx. 1 million years B.C. Crazily enough, In the end of May 1984, he actually took them up on it and did it. Joseph shared that the time portal he entered looked like there was a pyramid in the lowlands. The inside of this funnel was very smooth as if it was made of polished megaliths. Looking up from within, this seemed endless.

Joseph was what’s known as a remote viewer. Someone who practices remote viewing (RV) is developing their psychic abilities to see things that their two eyes don’t see, but rather their 3rd eye (pineal gland) does. Remote viewing has many skeptics, and is ostracized on websites like Wikipedia. Because, imagine if everyone knew that they could utilize something like this overnight. Developing psychic abilities and decalcifying their pineal gland (3rd eye) would wake up a lot of sheep.

The practice of seeking impressions about a distant or unseen target, purportedly using extrasensory perception (ESP) or “sensing” with the mind.

Remote viewing experiments have historically been criticized for lack of proper controls and repeatability. There is no scientific evidence that remote viewing exists, and the topic of remote viewing is generally regarded as pseudoscience.

Typically a remote viewer is expected to give information about an object, event, person or location that is hidden from physical view and separated at some distance.

Physicists Russell Targ and Harold Puthoff, parapsychology researchers at Stanford Research Institute (SRI), are generally credited with coining the term “remote viewing” to distinguish it from the closely related concept of clairvoyance, although according to Targ, the term was first suggested by Ingo Swann in December 1971 during an experiment at the American Society for Psychical Research in New York City.

Remote viewing was popularized in the 1990s upon the declassification of certain documents related to the Stargate Project, a $20 million research program that had started in 1975 and was sponsored by the U.S. government, in an attempt to determine any potential military application of psychic phenomena. The program was terminated in 1995 after it failed to produce any actionable intelligence information

Yet, films like “The Men Who Stare At Goats” with George Clooney were based off real life stories of military personnel practicing remote viewing.

Joseph developed his psychic capabilitites through remote viewing training within the military. He used these skills to follow a group of Martians on Mars. They tried to find a new place for living and ended up on a completely different planet, with seething lakes, erupting volcanoes, a smokescreen of smog and fog.

The official story goes that the psychic medium between this world and theirs was asked to establish contact with one of the aliens. Unfortunately, none of the creatures were able to be contacted, since the medium seemed to be just a hallucination for them, nothing came of it.

Joseph McMoneagle, Edwin May, Victor Rubel and Lloyd Auberbach all co-wrote the book “ESP Wars: East & West: An Account of the Military Use of Psychic Espionage as Narrated by the Key Russian and American Players. Click here to view it on amazon.

If you want to develop your pineal gland, and crack the calcium and fluoride that has clogged up your 3rd eye (also the pineal gland) then make sure to sign up for our email newsletter here as this will be something we explore further in months to come. 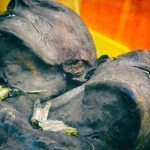