The world is full of awe and wonder, and most of what we experience in everyday life is just a small fraction, a small percentage of what’s truly out there. We live on land, so often, we forget about the sea. The fact that 71% of the earth’s surface is covered in water. We forget that there are entire cities, lost, ancient civilizations that have quite literally fallen, eroded or been stormed into the sea. Today we unearth and explore some of these discoveries in an effort to understand better what’s really out there. And what’s lurking in the waters beneath our swimming feet…

2. A Hidden River In The Black Sea: Scientists have discovered a river that follows along the bottom of the black sea. Deep sea divers explored the area and found that the river had it’s own waterfalls, trees and sea. It is like a whole new world, below the surface of the sea. If this river were on land, it would be the 6th largest river in the WORLD. The water moves along the ocean floor at a rate of 1/2 mile per day.

3. The Pyramid of Yonaguni: A scuba instructor dived off the coast of the Japanese island Yonaguni in 1996 and what he discovered was shocking. A pyramid with a human face carved in it. It’s been said that the Pyramid sunk into the ocean after a large earthquake. Experts determined that this pyramid was built in 10,000 BC. Bet you didn’t expect pyramid under the sea in Japan?

4. The Lion City: An ancient Chinese city was flooded on purpose to make room for a new hydroelectric power station. The city dates back to 621 AD and is still in perfect pristine condition as you can see here…

5. A Disc (UFO) On The Baltic Sea Floor: Swedish divers uncovered what is to be believed as a UFO on the ocean floor. Their electrical equipment stopped working when they got close to the spacecraft. What else is interesting about this? They noticed a staircase led into the interior of the object. Do you think it’s possible that a UFO crashed into the Baltic sea? Here it is below..

6. Sunken Pirate City At Port Royal: Port Royal Jamaica was ruled by unruly pirates up until 1692. A huge earthquake AND tsunami (talk about natural forces to be reckoned with working together) shook the wet and sandy foundation of the town and sunk it into the Carribbean. The city had plans to open this as a pirate tourist destination, but for now it still sits on the bottom of the ocean floor.

7. The Titanic: The largest ship at the time was sunk because it ran into an iceberg. But was that the real reason it sunk? or was there a deeper reason underlying the sinking of the Titanic ship that had to do with international bankers and the control of power? Matteo shares in the Great Titanic conspiracy exposed,, the real reason why the titanic sank. Read that article here.

9. Whale Washes Ashore: When a whale washes ashore it’s no small sight. These 13,000 pound animals draw a crowd, and for good reason. The whale is the largest animal in the world. Rarely do they wash ashore. But when they die from natural causes, or unnatural causes such as being hit by a boat propeller, they wash ashore and it is a sight to be seen.

10. Underwater Sculpture Park West of Grenada: The worlds first underwater sculpture park was created just west of Grenada. It was designed by British sculptor Jason Decaires Taylor and it features people from a local community, children holding hands, a life-sized man riding a bicycle and a man at his desk working.

It’s no surprise that there are plenty of objects, ET life forms, ancient societies and treasure buried beneath our feet at the depths of the ocean still. With approximately 71% of the earth’s surface being covered in water, the majority of our lost findings and ancient artifacts and ancient societies can be found in the aquatic regions, sunk down over hundreds or thousands of years of new plant growth and erosion. 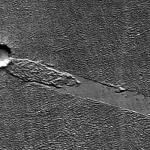