One of our readers sent us two fascinating videos of what he saw in the morning skies over Orlando, Florida taken in the summer of 2018. In the video, there is a glowing “snake-like” cloud that is forming as ring. A bright light at the beginning of this cloud grows in a cocoon shape as it is slowly descends.

There is a glowing cloud seen on the second video that Gus Marquardt recorded. He says it was seen for an hour after this odd sighting.  As a sun was coming up, the other clouds are not glowing, but the leftover cloud “ring” is.

“Is this not the trippiest thing you’ve ever seen? This is not a launch that I have seen in my entire life.”

This sighting happened during one of the SpaceX (company run by Elon Musk) rocket launches that happened that day at 5:42 a.m. However, many are questioning the ghost-like contrail left in the sky as it was unlike anything most people seen before; and many are fascinated with watching rocket launches. Yet this was extraordinary.

Other people on Twitter have called out SpaceX for potentially covering an UFO, including singer and actress Demi Lovato who later deleted her Tweet.

“It came out of nowhere,” said Marquardt in the footage.

What do you think: SpaceX rocket or a UFO? 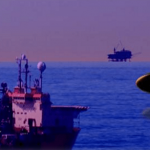